Facebook
Twitter
Pinterest
ReddIt
Email
We love that through our partnership with Roger Williams Park Zoo we are able to bring you this review of the Jack-O-Lantern Spectacular. As always, our opinions are our own.

Should you bring the kids to the Jack-O-Lantern Spectacular? It’s a question I’ve been grappling with for a few years now.

The thing is, my children are sensitive. We can’t watch any movie in our house, even “not scary” ones, because they all have at least some tension. They’ve yet to make it through a sleepover at their cousin’s house. And although they love trick or treating and dressing up, some of the spookier aspects of the Halloween season make them wary. So despite all of the buzz around the Jack-O-Lantern Spectacular, and despite vaguely considering it every year, I’ve always landed solidly in the “maybe next year” camp. A few years ago my parents and brother brought my nephews and their raving almost convinced me, but I still resisted.

Then last year, Roger Williams Park Zoo invited writers from Providence Moms Blog to check out theJack-O-Lantern Spectacular and talk with the carvers. I left the kids at home, still thinking that it would be too much for even the oldest, but as soon as I stepped onto the trail of pumpkins and experienced the breathtaking display I was full of regret. I knew I’d be bringing them this year.

The Jack-O-Lantern Spectacular truly is a spectacular sight to behold. The excitement builds when you enter Roger Williams Park Zoo. Everywhere you look there are signs of Halloween and carved pumpkins. The kids were delighted to see a place they so often go so completely transformed. They “oohed” and “ahhed” over the skeletons, spiders, and various displays. They were  delighted by the decorations they barely even noticed the poor elephants (usually a favorite!) 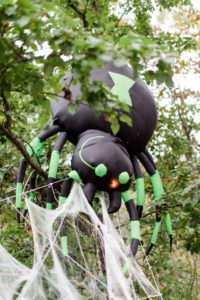 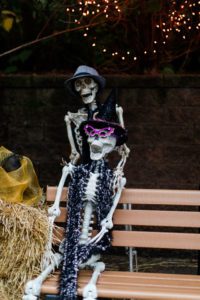 But none of that even holds a candle to what awaits on the wilderness trail. The trail opens at nightfall and is breathtaking. Over 5,000 pumpkins line the path, creating a captivating atmosphere that even my wiggly one-year-old found mesmerizing. As for the scariness factor? My kids did fine. We went on the earlier side of things so it’s wasn’t pitch dark yet, but even at the end where there are two GIANT Jack-O-Lanterns, a fog machine, and eerie music playing over a loudspeaker, they danced happily along, excitedly pointing out their favorite designs.

It helped that the fog was purple. Purple fog is awesome.

Roger Williams Park Zoo goes to great lengths to make sure the show is a success and enjoyable for everyone. The RWPZ director and carver with whom we spoke are both fathers and it’s clear that they get it. Taking kids out of the house during the day can be daunting enough. Doing something special like this can be an undertaking, and RWPZ is committed to doing what they can to make it an enjoyable experience. Timed entry on the weekends has cut down on lines and traffic, strollers are allowed on the trail, and this year, Roger Williams Park Zoo has added theme nights during the week to make the show even more appealing to families. Fairy Tale nights take place on October 10 & 11, Wizard nights on October 17 & 18 (they’re going to have butter brew!) and Superhero nights on October 24 & 25 (rumor has it you might see Captain America, Spiderman, Black Panther or Iron Man!) On these nights, kids will have a chance to meet and take pictures with characters from 6 until 8pm. Bonus – tickets to the Jack-O-Lantern Spectacular are $3 less on weeknights and should be less crowded than on the weekends.

So should you bring the kids? It’s a resounding “yes!” from this mama. Will they be up past their bedtime? Probably. Will it be worth it? Absolutely. You can purchase tickets ahead of time to make the evening a bit more seamless and the show runs through November 4th – so if you’re really hoping to avoid lines head over after Halloween when crowds are very light.

Some fun facts I learned about the Jack-O-Lantern Spectacular to share with your kids: 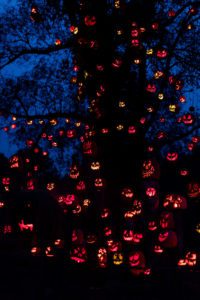 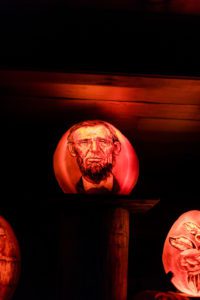 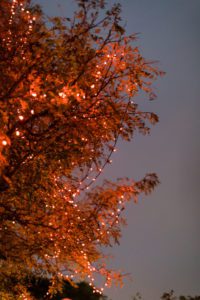 Thank you to Eilsey Images for the beautiful pictures. My cell phone camera would not have done this justice. 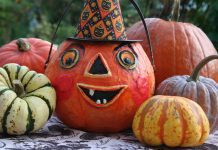 15 Alternatives to Trick-or-Treating for Halloween 2020