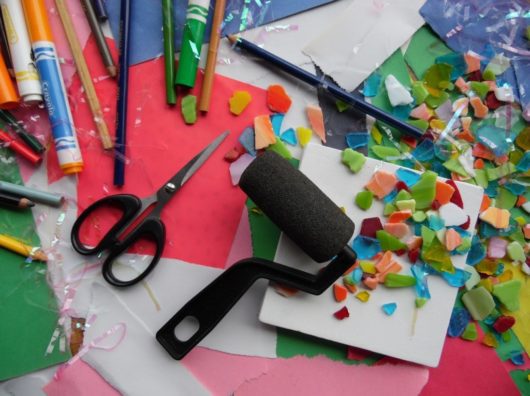 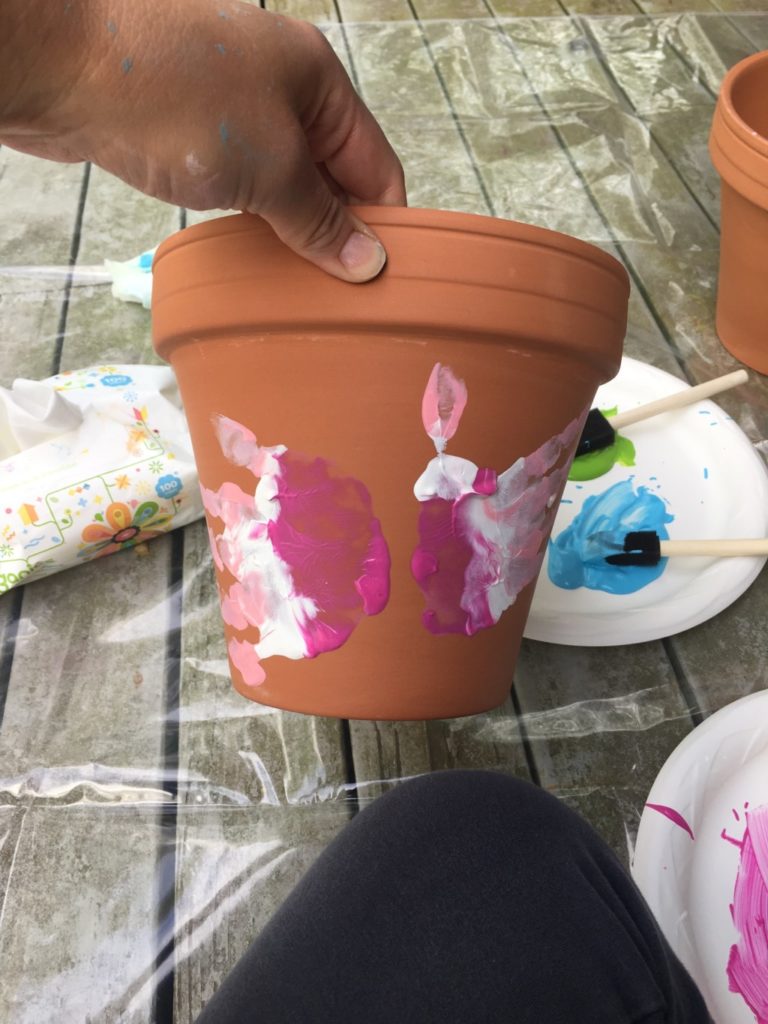 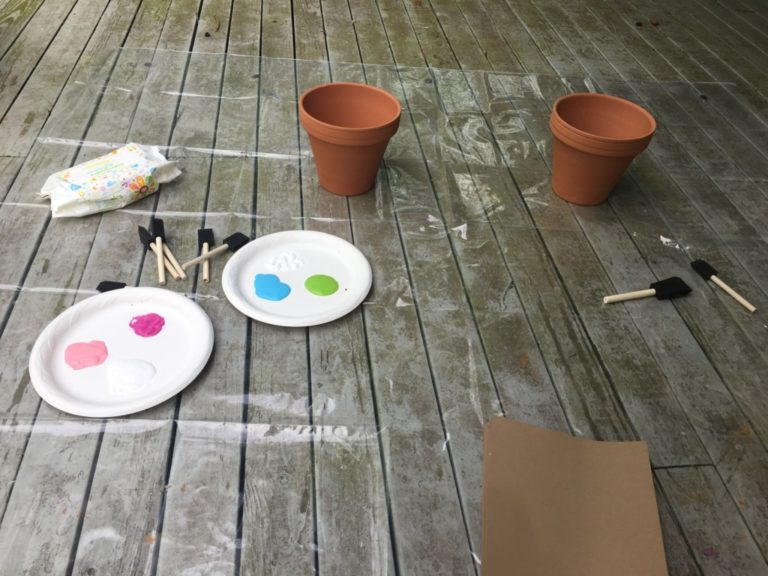 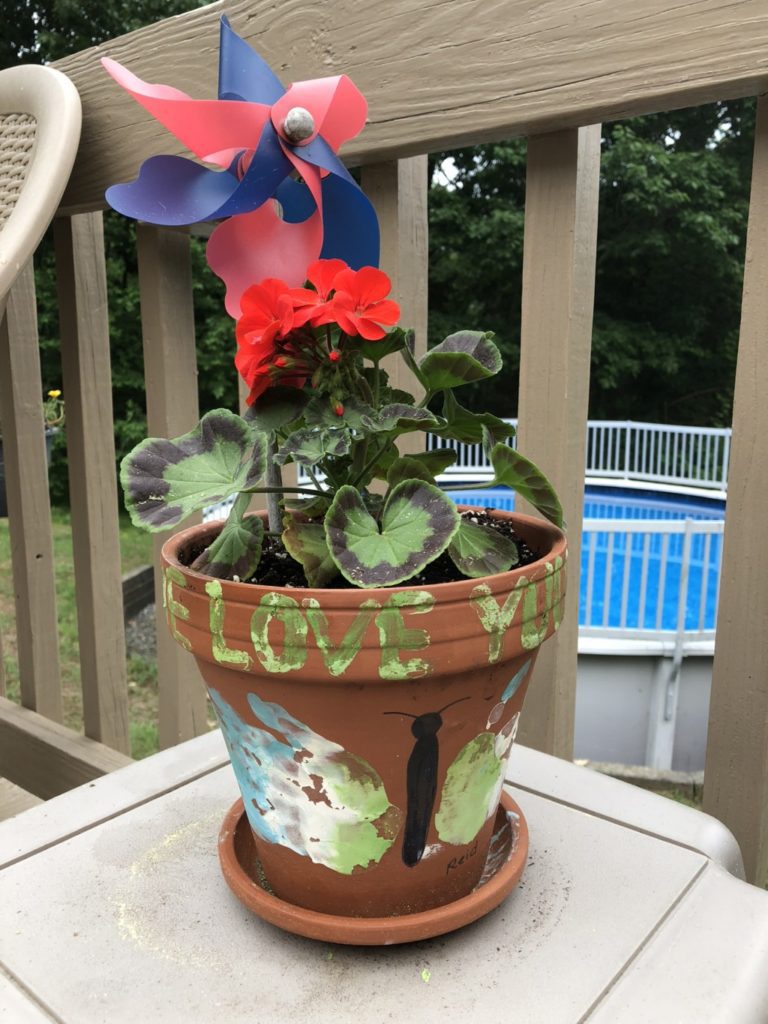 According to my Facebook feed, moms and kids love doing crafts together. Bummer for me, because I truly do not have a crafty bone in my body. I’m not sure if it’s my sub-par fine motor skills or just a genetic predisposition, but arts and crafts are just not what I would consider my ‘thing.’ I’ll never be the person who can whip up a perfect Halloween costume from dish towels or whatever, but for some reason, I was really hoping to have my kids make something personal as a gift for Grandma for an approaching holiday. After some Pinterest research, a trip to Michael’s, a few messes, and a baby with a mouthful of paint, the finished product of my efforts came out – dare I say – not bad? After executing a semi-successful kids’ art project, I have a few tips for anyone else who thinks they can’t pull it off (spoiler alert: you can!)

The project I chose was decorating terra cotta flower pots with hand and footprint ‘butterflies.’ (See what it was supposed to look like here). After carefully reading a blog post about it, I made a shopping list and headed over to Michael’s to pick up the materials. The original post suggested I use acrylic paint, so I grabbed some of that, then immediately started wondering if it was safe for my baby’s skin. An employee suggested that I get non-toxic children’s paint, which would stay on because I was going to spray the pot with sealant. Um, DUH, why didn’t I think of this? The blogger from the original project clearly had an older daughter and therefore didn’t have to worry about the paint being consumed, but with a 14-month-old, non-toxic was a major plus. When my son decided that the paintbrush was a spoon, opened up, and took a big old bite, I was extra happy I had asked for help. The look on his face when he tasted the orange paint clearly said ‘thanks so much for buying non-toxic paint, mom!’ (just kidding, it said ‘GROSS!’) But either way, if you’re not familiar with all things crafty, asking an expert for any pointers is a good plan.

Get Everything Set Up in Advance

With two little ones and a project whose outcome you actually care about, the last thing you need is to be trying to set up materials while they’re underfoot. I don’t know about your kids, but mine get super excited to do a project and jump right in whether I’m ready or not. By the time I’ve finally got things ready to go, the table is a total mess and the project has already gone to heck in a handbasket. That’s fine with me for everyday play, but not when I actually care. So I plopped my kiddos in front of the TV (no shame here, this is what this thing was created for!) and got all prepped for the project… Which brings me to my next tip…

Setup Somewhere You Don’t Care about Getting Messy

I needed all my mental power to concentrate on this project! By planning it this way, I could just think about the project and the kids and not worry about the mess. I put a clean shower curtain on my deck and spread out all the materials so we wouldn’t be on top of each other. That way, after picking up, I could just grab the shower curtain and no more mess! I won’t go into detail about how I left the curtain out there and it got dirty and rained on, but I mean, my intentions were worthy.

My baby is 14 months, but yours might be 2,4, or even 10. Basically, my point is: have the least patient and most impulsive kiddo do the project first. It might be tempting to test it out with a big kid first, but I found it easier to do a quick ‘trial run’ on a piece of scrap paper with the baby, then do their real part of the project. That way, you don’t have to deal with an excited and impatient kiddo digging their hands into the paint, spilling the googly eyes, or whatever else you have going on while you start with the big kids. The kids who are waiting will still probably dig in a bit, but hopefully, they are old enough that their motor skills are more likely to drop a couple pipe cleaners on the table as opposed to a sea of glitter on the floor. Another perk: Since your little one also likely has a short attention span, by the time you’re done crafting with them they’ll probably have lost interest and be ready to go get into some other mischief while you and the big guys work (slightly) more carefully.

In the end, everything turned out fine. It’s certainly not going to be displayed in the RISD museum, but it was cute and Grandma really seemed to like it. Maybe I’ll try this out again, or maybe I’ll stick with store bought stuff… But it’s nice to know I have the option! 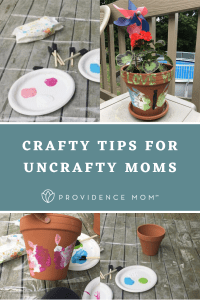 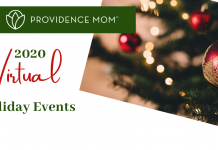 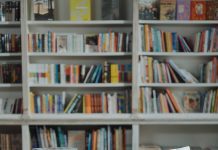 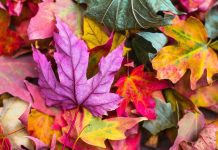