I won the argument. Maybe.

It had started two months earlier, over drinks with a friend.

It was one of those perennial parent questions. How much help should you give your kids? In my case, it’s my adult kids.

This argument began over what I thought was a given, a throw-away example; namely, the importance of take-out pizza, and movie night.

“I want my kids to have enough money so that they can buy a pizza on…those days…” I had mused. “My daughter works; she picks up her kids at daycare; she’s tired; they’re tired. The kids have been good all day. And all they want is the opportunity for a mammoth melt-down in the safety of their own house while clinging desperately to their mother. All their mother wants is to get supper into everyone’s belly. All her husband wants is a quiet house, and/or permission to ‘please’ work late. In my daughter’s experience, this toxic combination ends exactly the way anyone would predict.

“So..” I had said, “Contemplate the miracle of take-out pizza and movie night. I don’t want my daughter to live so tight to the bone that she can’t afford those. And I can help.”

“But.” my friend had protested. “There are other solutions. She could make a pizza on the weekend, and freeze it. She could…I never had enough money for a take-out pizza; I had four small children, and we survived fine. We figured it out because we had too. I trust my kids to figure it out too.”

“But…” I sputtered. I tried out arguments and counter-arguments in my head. You didn’t work. I wanted to say. Your kids weren’t at daycare…And the pizza was the example, not the point…

She may have sensed my sudden defensiveness or my clenched fists.

“I didn’t mean to start an argument.” she back-tracked. “I’m just playing devil’s advocate. I like exploring how different people think about things.”

“I wish…” I rambled. “I wish that I had gone easier on myself back then. That I had bought more take-out pizza, or hired a babysitter even when I wasn’t working. I was penny-wise and pound-foolish. I don’t want my kids to make that mistake.”

We went on to less fraught conversations. But over the next two months, I brooded, and stewed. What should I have said? How could I have won that argument?

Two months later, we found ourselves together again. And the subject came up. (I swear, I didn’t introduce it.)

“I didn’t have any family nearby. I had no support system. Every month I scrambled for money. But we found our own solutions. Our marriage and family got stronger as a result.”

I had different memories of my own early days. I remembered stress multiplying exponentially. My husband and I would argue, the kids would sense it, and try to fix it. By clinging to us. We’d get angrier. The kids would cling tighter. Sometimes, I thought of life as like a car going around a curve. At a certain speed, you’re making time, you’re in control, and exhilarated. But if you go just one mile faster, that car is going to turn up-side-down, crash, and burn.

The trick in life, I try to tell my kids, is to slow down before, way before, you reach that last mile. And the trick isn’t to double-down on hard work and sacrifice; its to use judgment to know what you personally can, and can’t handle.

And then, I knew my counter-argument!  After all, I had thought about it for two months.

There was a short silence, and I had the floor.

“I watched you bring up your children.”

In my head, I was remembering one particular incident. The two families were going camping together, and for some reason, we had stopped at her house on the way. We all had to travel to the campsite and set up before it got dark. But when we got there, we found her sitting cross-legged on her kitchen floor, surrounded by 4 messy, undressed children, and several batches of laundry. Her husband walked in and out, tense and distraught, describing a broken tent trailer. We looked around, not sure how to help, and wished we were anywhere else. I would have been totally freaking out.

But my friend just smiled.

“Oh, we’re a little off-track.” she had said calmly. “But we’re fine. Go on ahead…We’ll just meet you down there…”

“You weren’t normal!” I insisted. “You were always so calm and unruffled. You had… like…a serotonin drip…like… some kind of natural high thing going on.” 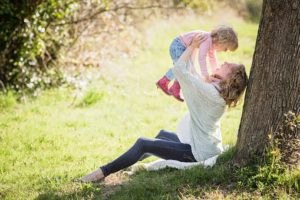 “If there was a bell curve for serene parenting…” I continued “You would be on the 90th percentile. I’d be…maybe…40. You were a great mother. Me, well…thank goodness I worked.”

I had won the argument! I mean, maybe. Actually, the conversation just moved on.

My friend may have even still thought she was right. And, maybe she was. (Not about the miracle of takeout pizza, of course. She’s totally wrong about that.)

But, on the virtues of letting kids figure it out themselves maybe she’s got something. In the story I tell myself about my life, I should have relaxed a little, and asked for more help. My husband and I never crashed and burned. We’re still together, and our kids turned out OK. But I think they might have been better off with happier and calmer parents. And, unlike my friend, I’m not a naturally calm person.

In the story she tells herself, she made do without much help and emerged stronger because of it.

There’s truth in both stories.

Maybe neither of us needed to ‘win’ the argument. Maybe we just needed to talk a bit and explore how different people think about things. And then give each other grace. We’ll all different. Some of us can reach heights, and others should first reach for a stool. 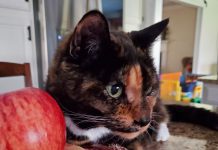